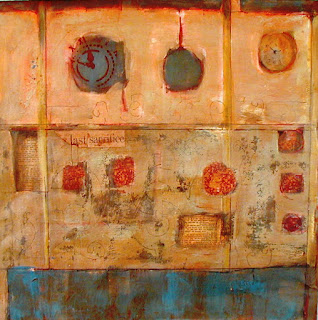 18"x18" paper, acrylic, collage, stencil and graphite.This is the beginning of some exploring of acrylic methods I've been wanting to try out to see what works for me and what doesn't. I set up this piece in three rows and focused on the center for new trials. One was layers: one coat of acrylic, one all over spritz of water, paper towel blotting and then another coat of another color of acrylic...over and over. The little red squares and circle are what I salvaged from that project. I worked on textures and stencils and using graphite then finished it with an all over coat of glazing. This piece looks far more interesting then in' real life'...it seemed to photograph much lighter and brighter...I like when that happens!  The clocks have helped me interpret my exploration. Leaving off hands and numbers between the 2 rather ticking clocks is a personal reminder of time and no-time...patience with this exploration and enjoying this playtime. I have so many methods and materials and combinations in mind that my work table is covered with stuff as well as crumbled notes to self.  Different palette, compositions, combining materials as well as a long list of subjects for study and inspiration. It doesn't take much...a PBS show, something interesting on the History channel, newspaper. My fathers words to me when I was a young girl were "Now just settle down Mary Ann, calm down"...I would get so excited...I think I made him nervous!
Thanks again for visiting guest blogger, it was much appreciated!
Posted by Blue Sky Dreaming at 1:51 PM 9 comments: 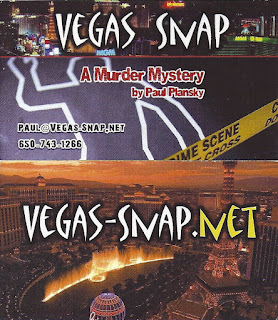 These past few days I've been busy at the work table trying some interesting new methods with acrylic and generally making a big mess. I have little to show so this week I've given this post to Pablo (my husband). While I was art making in the studio he was writing a mystery novel which is now completed. The link to his website is: Vegas Snap

I'm grateful to Mary Ann for this opportunity to chat about my book. Set in glitzy Las Vegas at the peak of America's real estate bubble, the theme is: Those seduced by greed can lose not only their money but also their sanity and their very soul. Follow the callous and unrepentant con man whose most daring and brazen scam may have gone too far.

To get more of the book's flavor, go to the Menu tab "About the Story". For my bio, click on the "Meet the Author" tab. You're also welcome to leave a comment. You can click on Chapter 1 and 2 (both posted under "New Posts" and "News & Overviews". At the bottom, you can talk about which chapter is the best to lead off the book. Thank you, bloggers.
Posted by Blue Sky Dreaming at 2:47 PM 4 comments: 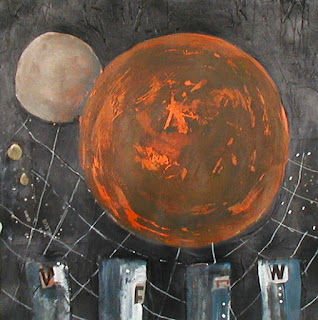 14"x14", acrylic, collage, white ink. History has changed... Pluto is now a dwarf planet and one of the large bodies within the newly charted Kuiper belt. 2015 will provide photos of Pluto that I'm sure will add to the changing information. Now I've learned that Pluto has four moons Charon, Nix, Hydra and one named provisionally s/2011P1. Pluto's surface is 98% nitrogen ice and its color varies from black to orange. Pluto seems to have a special connection to its largest moon Charon ...they face one another and seem to dance in their orbit.

In creating this image, I was impressed by the story of the kidnapping of Persephone and taking her to the underworld as Pluto is the God of the Underworld and Charon  is his boatman who ferries the dead to the underworld on the river Styx. There are four rivers in the underworld...River of Woe, River of Forgetfulness, River of Wailing and River of Fire...I'm not sure how they all connect but I love the names. These myths are rich and full of vengeance, justice, love and all things connected to the darker underworld. A forbidding world and again rich in imagery.

This places me at the end of the solar system yet of course, we all know there is so much more! I wholeheartedly believe I've just touched on the art making potential but for right now I feel the series has been explored and I'll leave it aside for now and return when it pulls me back with new inspiration. I will not be checking into more of the Kuiper belt or the Oort Cloud  or all those new planets being named and reported regularly but rather finding myself at the beginning the "Wait Station" the space place...an oasis where I might gather my thoughts, materials and play a little in the area of "Not Knowing". Writing and with time at the work table! 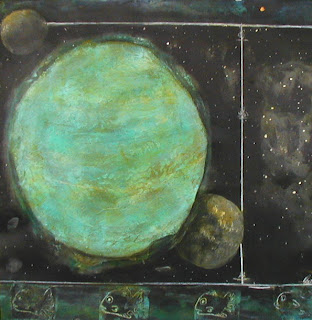 18"x18" acrylic, lino cut, cheesecloth, heavy gel paste and oil pastel.
Welcome to the color of Neptune, God of Water, also know as Poseidon. The  descriptions  of Neptune seem to conflict with Uranus...blue or blue/green. Out of all the colors on my palette,  my heart beats a little faster when I touch this blue/green. The actual planet is inhospitable with storms and a thick atmosphere of methane. One source reported 13 moons and another over 30. There are large moons and small misshapen ones and Neptune also has rings. These moons are named after the Greek and Roman water nymphs. (how appropriate!) Our neighborhood pool is opened and I can't help but think of floating and dreaming of being circled by all those moons of Neptune. I added four lino cut fishes as a reminder that this is Neptune and the milky way to denote how far out this planet is from the sun....which is that little yellow dot on the upper right....not at all to scale. It seems Neptune generates its own heat. Putting Neptune together took more time because I needed to stop and prepare materials for our tax appointment. I thought I had gone paperless but there was still a fair amount of shredding and sorting. With that behind me and dancing through the Holidays...I will take a look at our planet, or non planet or dwarf planet Pluto!
Posted by Blue Sky Dreaming at 1:46 PM 20 comments: 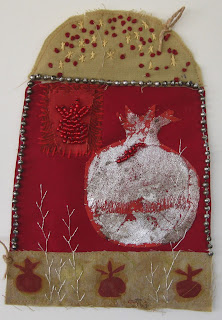